Moving on to Moss
November 2013

There is certainly something wrong with my controller, it is some sort of a wiring problem but honestly im not too worried about it. I just run the output to the Chronocontroller, then out again to the camera. So the CC sits in between and this seems to settle things down a bit.

I plan to build a far more robust controller in the near future, so this is an acceptable solution.

I have moved onto new things! Live Moss! and encountered new problems, with Flicker.

I know the flicker is not from aperture inconsistencies, as the lens is native f/2.8 and i have shot timelapse at f/3.2 on a regular basis and never had a shred of flicker.

clips i have done in the studio in the past normally look better than this, i think the most likely culprit at this point is the elinchrom strobes. Maybe the flash tube is getting tired, or maybe at slower shutter speeds such as 1/80 it shows more variation in the discharge of the flash. I might try bumping it up to 1/125th and see if that helps.

Either way i am pretty excited about the following clip, it is finally starting to get in the direction I am hoping to go.

Not too shabby huh? maybe a good deflicker program could help.

Towards the end the moss really starts to breathe!

SO I have been monitoring the temperature and humidity in the room, and normally it sits around 30-40% humidity which is pretty high for Colorado, but still pretty low for a lot of the plants i am hoping to grow in the future.

I stuck a humidifier in the room and got it up to 80%, but I do not know if a general room humidity level of 80% is a good idea, ill have to do some reading. I don’t want to get any mold growing in the room. I think i want to try a more localized “humid zone” right around the plants by blasting them with fog between shots.

I have not seen any off the shelf humidifers that really will be able to do what I am wanting, they already have the controls built in, limited reservoirs, and counter productive form factors to what I am trying to do.

So i guess ill just have to build my own damn humidifier. Parts have been ordered, I’m hoping to have it up and running this weekend. I was suprised with how inexpensive the parts are, with the savings I was able to pick up a large plastic enclosure i can use for the next incarnation of GreenThumb where I can have the switched outlets on the side of the box. Im pretty excited to get started.

So I think the problem here is the strobes I am using.

The while the Olympus OMD is no Nikon D4, I’ts no cheap point and shoot either. I have managed to get some excellent time lapses with it and it is not in any way prone to flicker.

But it is getting worse. Shooting wide open, fast or short shutter speeds, I think the problem is the strobe is getting tired.

I tried using LRTimelapse, but I don’t know about my workflow just yet. I have never had to deal with flicker, so this is a bit of a learning curve for me

I am open to comments and reccommendations, as well with workflow suggestions.

My workflow is as follows

2) Bring images into ACR, make any corrections/adjustments and crop, save as Jpeg at highest resolution.

3) Bring images into Adobe Pre-Pro, put in a sequence 1 frame per image, and scale to frame size.

now I don’t go crazy with 4k and stuff, maybe when I get better at this and further along in my project i will start working for 4k, but for now this is just really test and demo stuff.

With the deflickering i loaded everything in LRTimelapse after step 2, modified the existing exif with the JPEGS, then saved new Jpegs. (in this case I wanted a no-deflicker and deflicker attempt to see the difference)

I really do think the problem is the Strobes. I have another lighting solution i plan to start working on as soon as time allows which will use high intensity LEDs instead of flash bulbs. I suspect I should get a very even and consistent light output.

Deflickering advice is always appreciated, any workflows that you don’t mind sharing I would love to try.

Living in Colorado is awesome, I love it out here. However, the humidy is virtually non existent. We actually get very little rain or snow, because this is actually a high altitude desert.

With such low humidity, many plants are sort of difficult to grow. I needed a system to provide a high humidity zone without increasing overall room humidify beyond a certain point.

Mold is always a potential problem, so if you decide do embark down a similar en-devour do your research.

My goal is too keep the room Humidity to under 65%, with a local zone of humidity over 70%

I had looked at various humidifier systems but nothing really stood out to me. I needed something capable of delivering the vapor to a specific spot and nothing seemed to fit the bill unless I wanted to spend a LOT of money. The reservoir tanks were limited, the design not what i needed.

So i built my own. It was surprisingly easy, and not too expensive, i think i spent right around $150

The most expensive part is the ultrasonic vaporizer. I got mine off of Ebay. I got a 5 head fogger for about 90 bucks, here is a website to the manufacturer. http://www.thehouseofhydro.com/

And other parts I used.

and of course a large plastic tub with a Lid, an extension cable to cut up for the humidity controller, and a 12vdc power cable you can cut and use.

Construction was easy, got some GOOP glue, and I cut a hole out for the fan to blow air into the rub, and a hole for the 3 to 4 inch reducer. Using the GOOP I glued them together.

I cut the end off the power cable and spliced it in to the fans red/black leads, and plugged both the Fogger and Fan into a power strip that I plugged into the power cable which hit the humidifier controller. 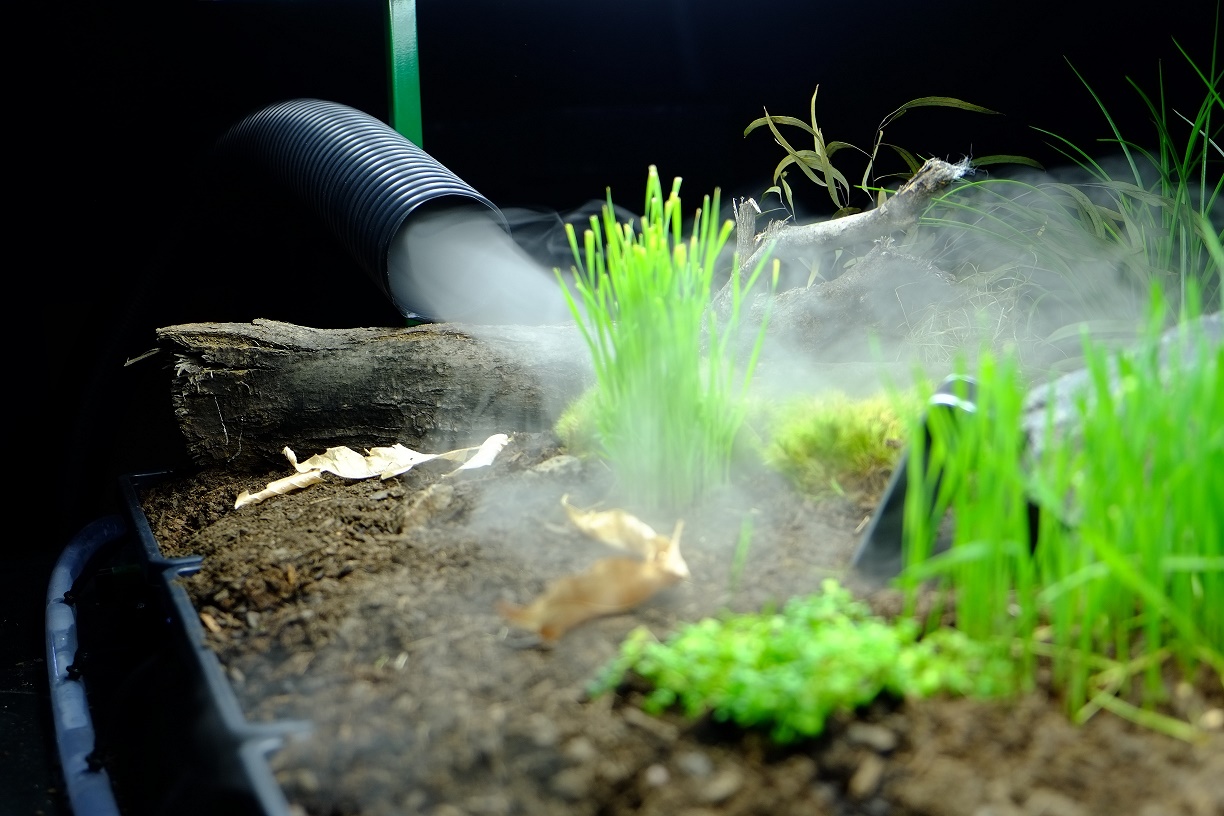 The humidity controller works like a champ. It is small, Inexpensive, and easy to use.

I plugged everything in and presto, I had a humidifier that will deliver the fog exactly where I want it.

I might have to play around with the fan though, it is a PWM fan and man, I really dont want to go through the bullshit of controlling it with PWM. right now I just use 12v, but the output is nothing impressive. So far it seems to do its job fine and it does allow me to deliver mist where I want it, but I might have to go with a bigger fan a little bit later.

So you timelapsers out there are probably scratching your head wondering exactly how i plan to work this in with timelapse. Trust me, I have this figured out and cant wait to show the process.

First, I have to build the next Greenthumb Controller.